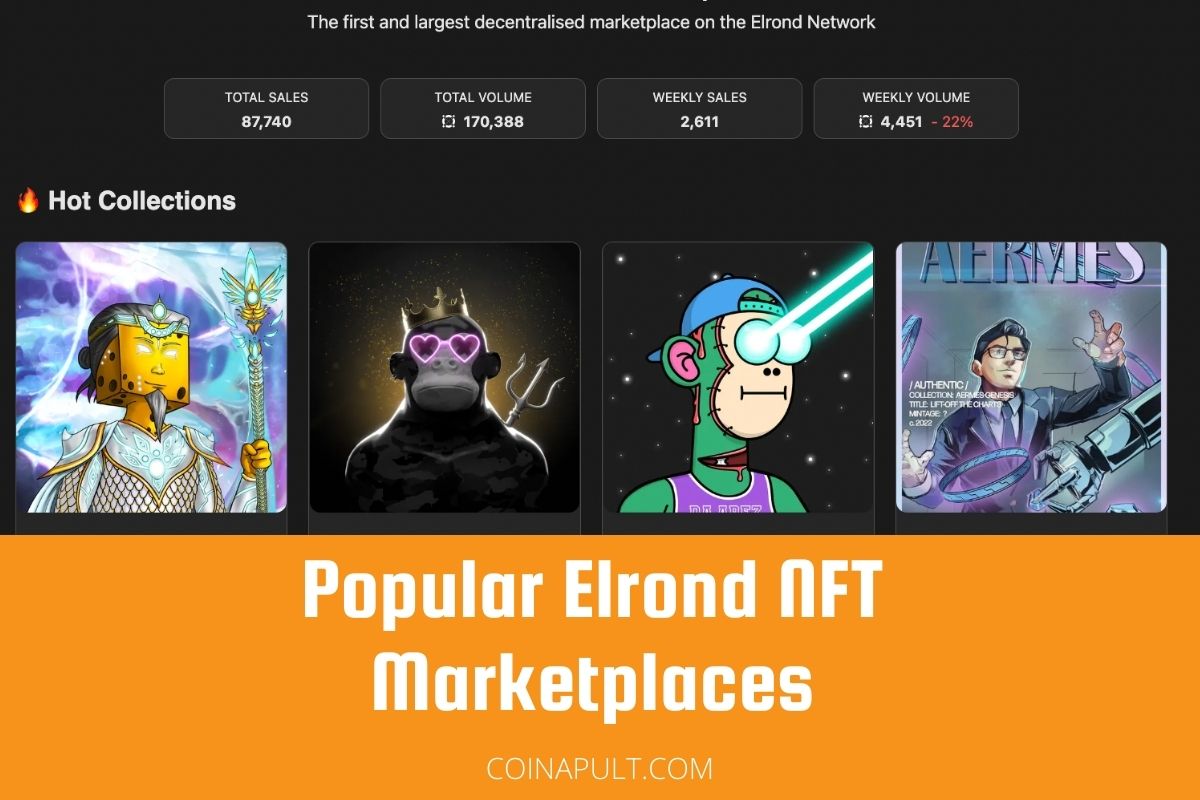 When the non-fungible token (NFT) sphere of the crypto world initially started, we saw a huge blast in its popularity. However, some of the most prominent and most popular creators out there utilized the Ethereum (ETH) blockchain initially to achieve this goal.

Ethereum is by far one of the largest blockchains out there in terms of its capabilities within decentralized finance (DeFi), and the next logical step for developers was to create their NFTs and marketplaces on top of it.

However, things got out of hand at points in time when there was a lot of network congestion, and each trader or NFT creator would see the true cost of minting on Ethereum. Specifically, due to its reliance on the Proof-of-Work (PoW) consensus mechanism, Ethereum is slow, not scalable, and has high transaction fees in the form of gas fees associated with minting or even buying and selling NFTs.

This might, over time, change as the network is working its way up towards transitioning to a Proof-of-Stake (PoS) system; however, for the time being, if anyone is interested in minting their NFTs on Ethereum, things are looking really expensive.

Meanwhile, the Elrond (EGLD) blockchain is seen as a solid alternative as a result of this, and you will find that there are numerous NFT marketplaces built on top of it as well.

Elrond is both a blockchain network as well as a platform that has its own native cryptocurrency known as EGLD.

In this article, we are going to go over the top Elrond NFT marketplaces, as well as everything you need to know surrounding Elrond and EGLD.

Things To Keep in Mind

• Elrond was originally created in 2018 but launched on July 30, 2020, and what makes the network stand out is the fact that it utilizes the Secure Proof-of-Stake (SPoS) consensus mechanism, which enables it to process transactions in parallel.

• Elrond, as a result of its numerous developments, now has the capability of processing transactions quickly and with very low costs associated with them. The network can process up to 15,000 transactions per second (TPS), which makes it one of the fastest blockchains out there.

• eGold (EGLD) is the native cryptocurrency used on top of the Elrond network and is used for platform governance, staking, and validator rewards, alongside giving users the ability to pay for transaction fees and smart contracts on the network.

What Is Elrond and what’s the use of EGLD cryptocurrency?

Elrond was developed in 2018 as a means of becoming a fast, cheap as well as efficient blockchain that can provide utility across a variety of different use-cases within the crypto sphere.

The network utilizes Adaptive State sharding and a unique consensus protocol known as Secure Proof-of-Stake (SPoS), technologies through which the network can process up to 15,000 transactions per second (TPS).

With that in mind, the native cryptocurrency that is used as a part of this network is known as eGold (EGLD), and its main purpose is to facilitate the functionality of the broader network.

Specifically, each holder of the EGLD cryptocurrency can participate within the platform’s governance mechanism, stake and get validator rewards in the form of the coin, or use it as a form of payment for the transactions and the smart contracts.

Elrond has three specific types of nodes that make its system work the way it does, including Validators, which are the primary nodes of the network that process transactions on the network in exchange for EGLD.

Then there are the observers, which are passive network nodes that read and relay the information. Then there are Fishermen, which are specialized nodes responsible for verifying or challenging block data after it has been processed by validator nodes.

Top 7 Elrond NFT Marketplaces That You Should Know of

If you are looking for an alternative blockchain network on top of which you can mint NFTs, Elrond is a solid choice due to its high speed and low transaction costs.

The future of NFTs can be seen in advanced blockchain networks due to the fact that they have enhanced features, an easier barrier of entry, and a high level of support for both cryptocurrency wallets as well as content creators.

Jump in with us as we go over the best Elrond NFT marketplaces. 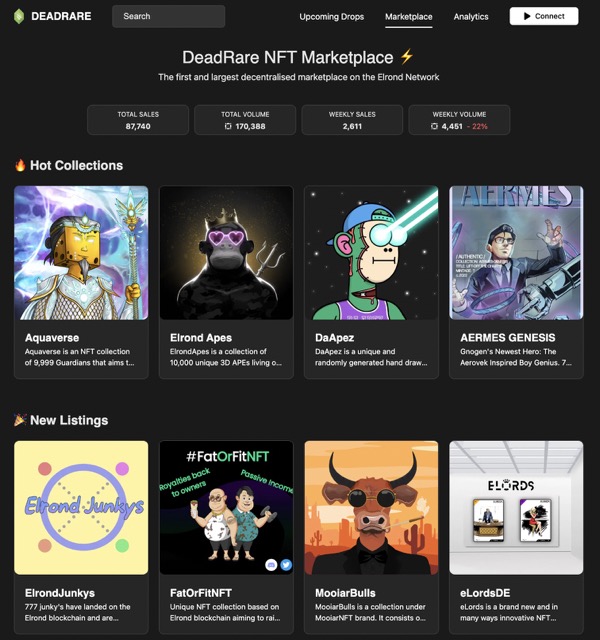 DeadRare describes itself as the first as well as the largest decentralized marketplace that is built on top of the Elrond network. It has gathered a reputation due to its minimalist design, broad selection of non-fungible tokens (NFTs) as well as analytical tools.

1. Analytic tools that give users an in-depth look at sales offers and all collections volume traded.

3. Access to the upcoming drops categories where users can stay in the loop on all of the latest NFT collections. 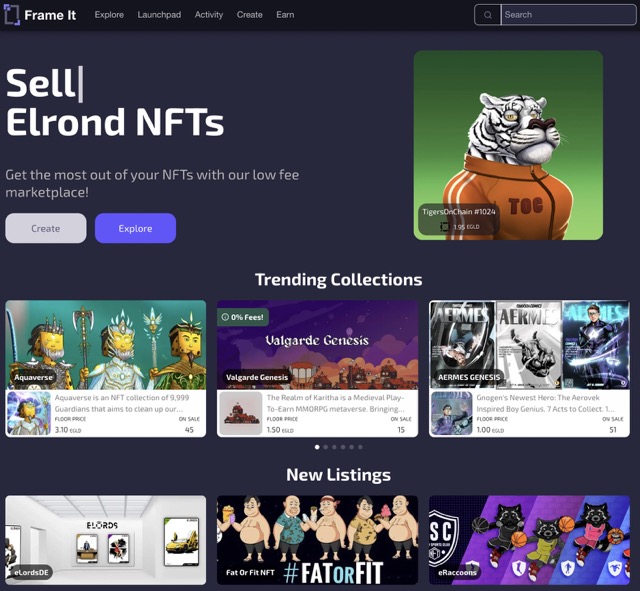 FrameIt is another NFT marketplace that puts the emphasis on solid website design, as well as providing users with the opportunity to get the most out of their NFTs with low fees. There’s also a launchpad, a marketplace activity monitoring section, and the ability for users to mint and receive rewards based on their tier.

1. Creator tools such as the ability to create an NFT or deploy a smart contract

2. Activity tab where users can view the amount of EGLD traded in total, a number of sales, offers, and mints within the span of the last 7, 30, or 90 days.

3. Bronze, Silver, and Gold tier systems, all of which let users earn while they use the marketplace.

4. Trending collections, new listings, and live auctions are all available. 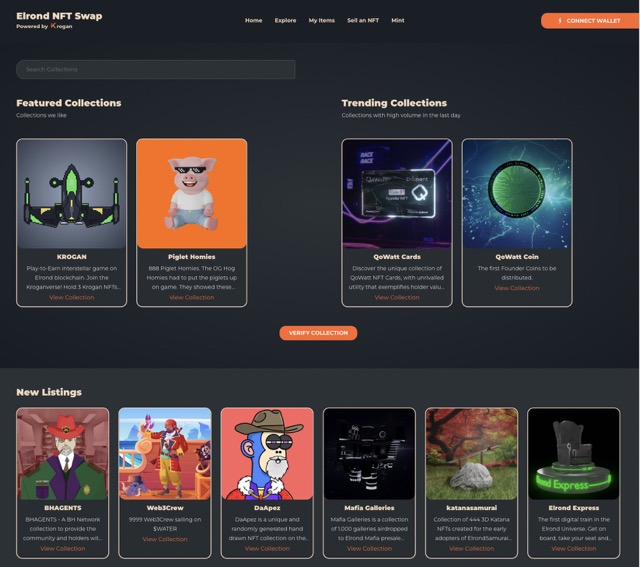 Elrond NFT Swap is an NFT marketplace that has numerous collections and features which make it stand out. Specifically, users can verify a collection prior to it getting listed, which leads to a much higher level of authenticity. There are also featured collections, trending collections, and the ability to connect numerous cryptocurrency wallets.

2. There is a minting category that allows users to jump in early on projects before they get released.

3. There are open offers and NFT Swaps available.

4. Access to auctions so that anyone can bid on their favorite NFTs 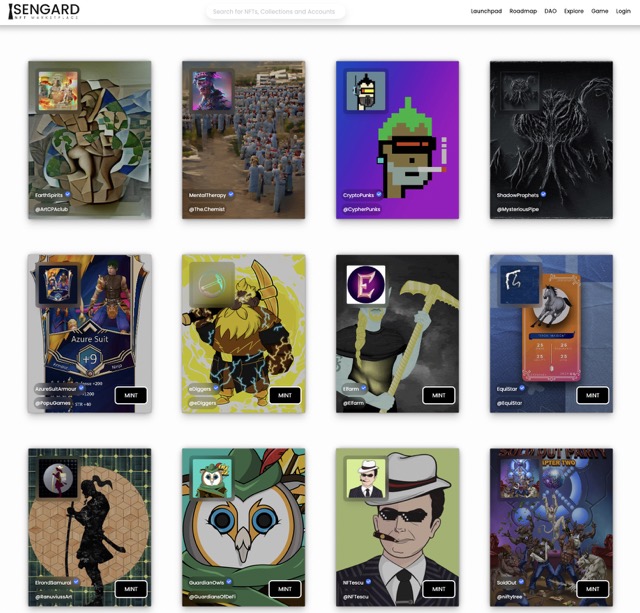 Isengard is an NFT marketplace that features a Decentralized Autonomous Organization (DAO), a Game known as the Elrond Flip Coin, alongside a launchpad, a roadmap, and numerous other features that are consistently added to it.

1. Through the DAO, there are constant votes on how the platform can improve and evolve.

2. There is a featured creators section that can come in handy for newcomer collectors.

4. You get stats on the total number of registered users, EGLD sales volume, and NFTs on sale. 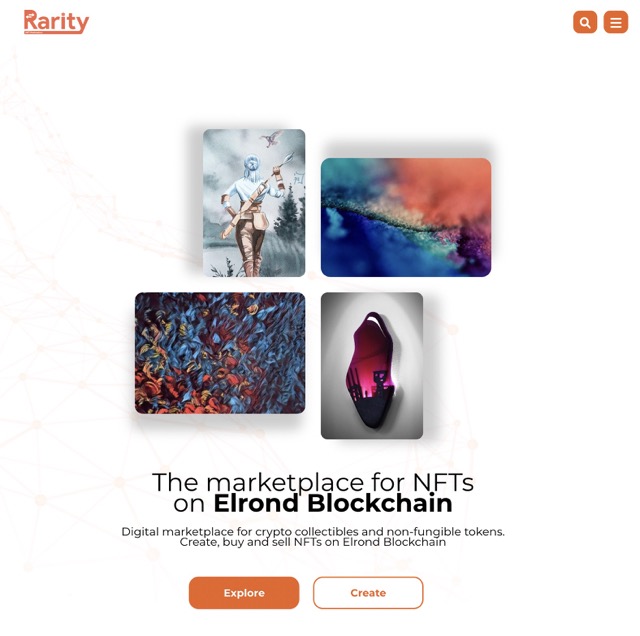 Rarity Market is an NFT marketplace that is built on the Elrond blockchain that aims to provide users the ability to create, buy and sell NFTs. There are featured collections, most liked categories, most recent categories, and access to a help center, discussion, voting, and EGLD staking.

1. There is a solid and simple user interface with a dedicated search bar that anyone can understand.

2. The featured collection gives users an in-depth look into what they can expect.

3. There are numerous NFTs and creators listed.

4. Anyone can connect with multiple supported wallets. 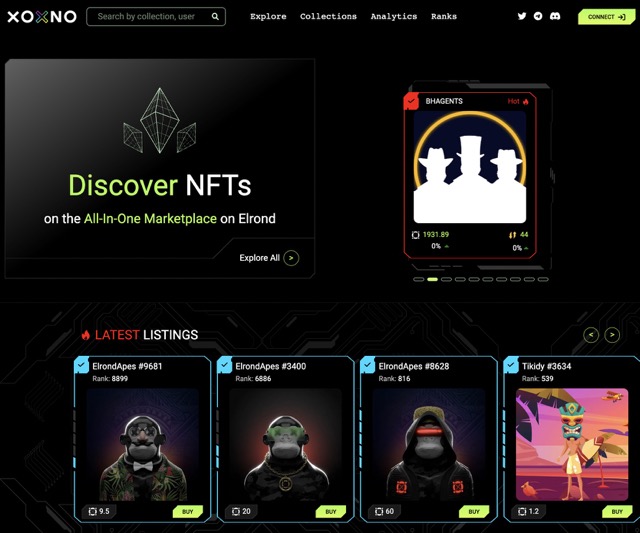 XOXNO is an NFT marketplace that has a sci-fi theme associated with it, making it one of the most futuristic-looking marketplaces on this list. Alongside showcasing listings of the latest NFTs, users can find collections, analytics, and even ranks to spice things up.

1. Collections allow users to explore some of the most popular NFTs minted on top of the Elrond blockchain.

3. There’s a ranking system that showcases the top collections based on total volume, floor price, and sales within a specific time frame. 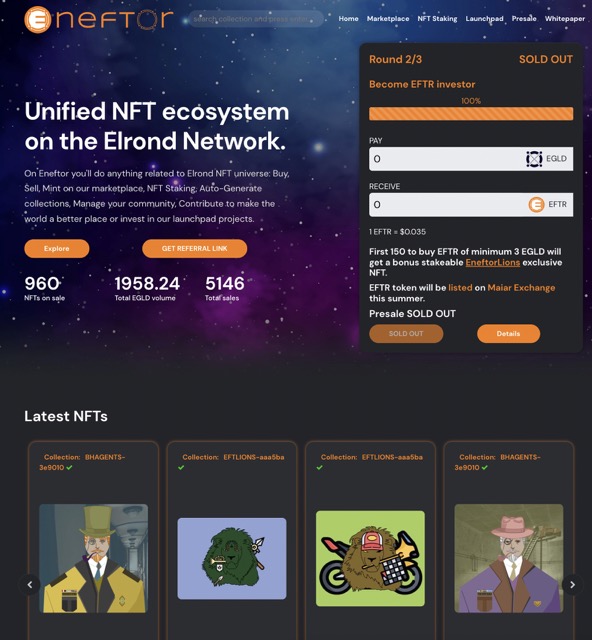 Eneftor is more than just an NFT marketplace, as it aims to be a unified NFT ecosystem built to function on Elrond. Specifically, it aims to give users the opportunity to do anything related to the Elrond NFt universe, such as buying, selling, or minting.

1. Users can engage in NFT staking and auto-generate collections.

2. Creators can manage their communities and contribute to making the world a better place through launchpad projects.

3. Anyone can become an EFTR investor.

Elrond and the EGLD cryptocurrency have a huge point of appeal due to the fact that the network can process 15,000 transactions per second (TPS). Anyone will be able to create, mint, and even list NFTs on top of the blockchain with ease and on a budget, and this serves to be a solid way through which anyone can enter the crypto sphere.

How to Bulk Transfer NFTs on Opensea?

How to Check Rarity on Magic Eden?

Coinapult is a community of crypto believers, and we are here to spread the word about cryptocurrency. Our mission is to provide you with educational information that will help you explore the revolutionary blockchain technology that will change the world for the better. We believe that cryptocurrencies will become mainstream, and we want to be at the forefront of this movement by providing you with all the information you need to get started.